The oldest rocks of the Malvern Hills date from 600-800 million years ago, the Pre-Cambrian period.  These hills are made of some of the oldest igneous rocks in Great Britain, which stand above younger limestone deposits that now surround them in the plains to the west and east.  Moreover, there are numerous springs, lakes and quarries adding to the variety of the landscape. 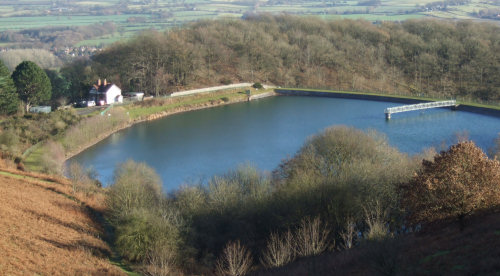 The spine of the Malvern Hills lies along the "Malvern Fault" which is one of Britain's major lines of structural weakness. The igneous rocks forming the core of the Malvern Hills was first created over 600 million years ago. About 610 million years ago, some of this rock underwent further transformation during violent volcanic activity where the rock was heated and compressed. Both these kinds of rock can be seen at British Camp. Then 570 million years ago volcanic rock was formed, known as the "Warren House Formation" - and this can be seen as a purple-blue basalt at Clutters Cave.

About 430 million years ago, the area was covered by a warm, coral sea which gradually deposited sandstone and limestone over the top of all the other rocks. Three hundred million years ago there was a violent collision with another tectonic plate and this pushed the old igneous rock up into the string of hills, with small fissures creating the individual hills and passes between them. This geological movement is known as the "Cheltenham Drive" and the resulting vertical strata can be seen and studied at Gullet Quarry.

Some 270 million years ago, the Malvern Hills were located near the equator in a desert environment.  The limestone was gradually eroded to leave the hard igneous rock. Then, 225 million years ago, more sandstone and mudstone was deposited on the eastern side of the hills, creating the particularly fertile Severn Plain and Vale of Evesham.

Igneous rocks are formed from molten rock and therefore do not contain fossils, and in any case, the rock was formed before animals which could leave fossils existed. However, fossils can be found on the lower slopes of the Hills in the limestone layers.

Find out more information at the Malvern Hills GeoCentre, a visitor centre on the Malvern Hills which has wall maps and lots of other information about the geology of this area including guides to buy. Further information online can be obtained from The Herefordshire and Worcestershire Earth Heritage Trust which is a non-profit organisation that records and protects geology and landscape, and engages in educational programmes to raise awareness of the Earth Heritage. The great variety of rocks in the Herefordshire and Worcestershire yields outstanding fossils and minerals, and they give rise to wonderful scenery. The Trust is committed to promoting and safeguarding these assets for all the residents of, and visitors to, the area.

Vertical strata, resulting from the "Cheltenham Drive" can be seen and studied at Gullet Quarry.

JavaScript must be enabled in order for you to use Google Maps.
However, it seems JavaScript is either disabled or not supported by your browser.
To view Google Maps, enable JavaScript by changing your browser options, and then try again.